The Strange Sanctity of Pakistan’s Priest-King 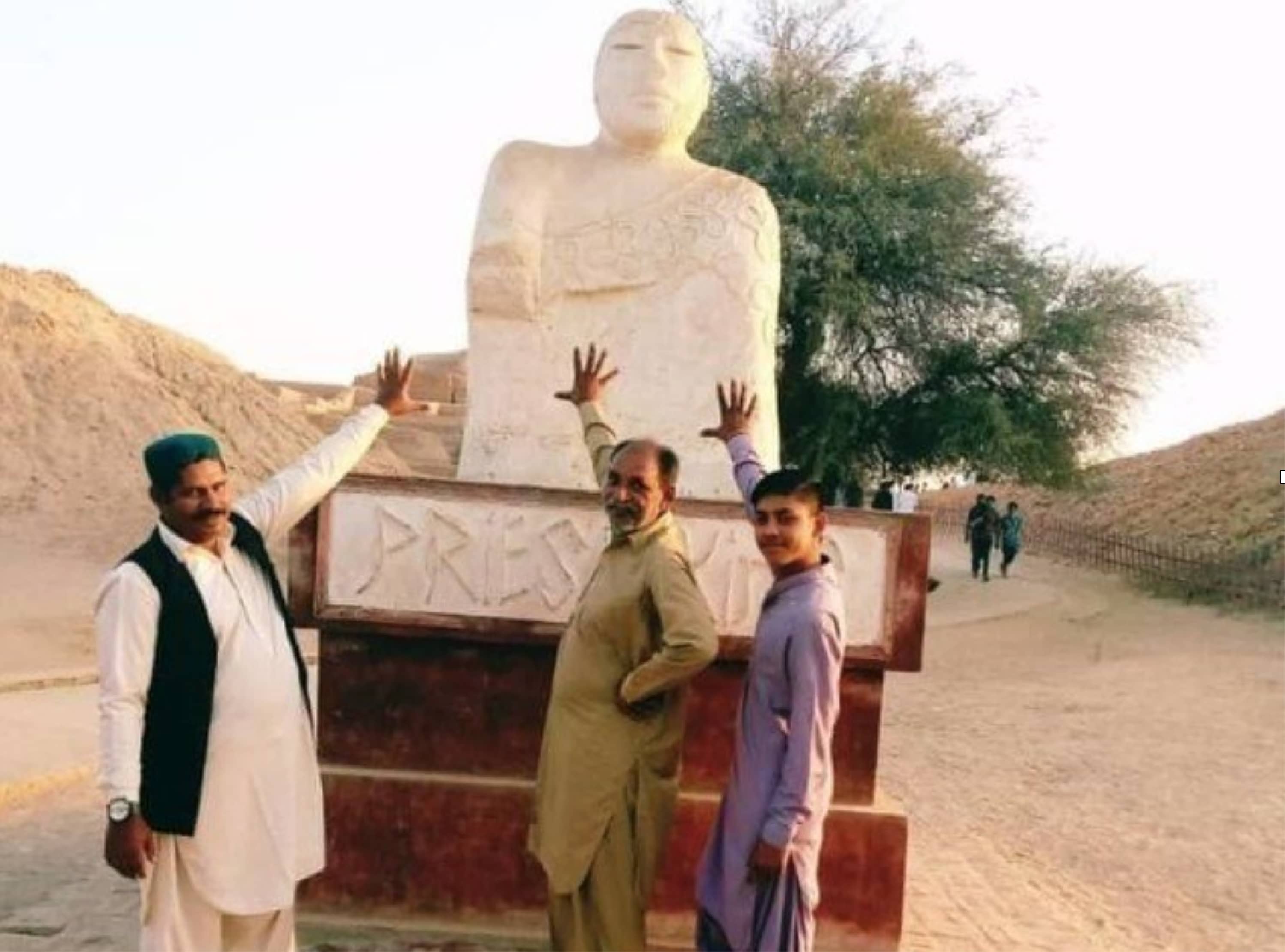 In April 2021, Karachi policed booked three men with the crime of insulting religion. Not Islam, the majority religion in Pakistan, and the religion most closely linked to its government.

No, the men were accused of having insulted the ancient religion of the Indus Valley Civilization, a culture a civilization that thrived some four thousand years ago, and for having done so in the most modern of ways: a selfie.

It seems that while visiting Mohenjo Daro, now a UNESCO World Heritage Site, our blasphemous trio paused for a photo op with the statue at the entrance, an enlarged replica of the enigmatic bust popularly known as the “Priest-King.” A fourth person held the camera or phone. The trio’s facial expressions hover somewhere between having-fun and slightly-bored. The cameraperson was, apparently, also distracted: the shot is off-kilter. The men’s hands are outstretched toward the large plaster figure, in a gesture easily recognizable as giving la’nat, bringing down a curse on somebody. Indeed, it is a gesture so recognizable that it has spawned an entire genre of meme:

Some memes recycle old film and TV content, as with this lady wishing “a thousand curses” on someone. Others assume that just seeing a palm will get the point across.

Still others go cheekily meta with the hand gestures. “Lookie here, a curse on you,” instructs Spock. “Bravo, bravo, a thousand curses,” says a snide lemur.

In certain contexts, lanat can have religious overtones, implying somebody is outside the pale of Islam. It seems likely that our blasphemy trio meant to invoke such a connotation, jokily cursing the pagan image. When they posted their photo to social media, this is certainly how it was received. Some online comments mentioned the Prophet Muhammad destroying pre-Islamic idols in the Kaaba or suggested that the men should have broken the statue’s head off; many more sprang to the Priest-King’s defense. Some comment-board warriors described the Priest-King as a “Hindu” image; others correctly pointed out that he predates Hinduism.

In short, Twitter, Facebook, and Instagram went nuts, with many users reportedly going so far as to change their profile photos to the Priest-King in solidarity with his wronged visage. And it was presumably this Twitter-storm that prompted the Karachi police to file charges against the three men under section 295A of the Pakistan Penal Code, which criminalizes “deliberate and malicious acts intended to outrage religious feelings of any class by insulting its religion or religious beliefs.”

Section 295A is almost, but not quite, a blasphemy law. When it was created in 1927, Pakistan was still part of British India, and the British government was struggling—as it had for more than two centuries—to figure out how best to govern the religions of its South Asian subjects. In Britain itself, blaspheming against Christianity was still a crime; as recently as 1921, a man had been jailed for comparing Jesus to a circus clown. Protecting only one religion would not do in multireligious India, however, so the British devised laws meant to protect all religions equally. We would now call these hate speech laws: they protected religious feelings, so as to prevent religious violence (if you find this a strange or surprising way to think about hate speech, I commend you to my forthcoming book, Slandering the Sacred:Blasphemy Law and Religious Affect in Colonial India). Four such laws had been in place since the 1860s, but they were deemed insufficient after a Hindu organization published a tract in 1924 spoofing the Prophet Muhammad’s sex life. A scandal erupted, and the government decided to create a new law, 295A, that remains in force in India, Pakistan, Bangladesh, and Myanmar.

As it happens, the 1920s were also a key moment in the history of Pakistan’s Priest-King, who had buried underground for millennia before he was discovered by archeologists in 1926, during the excavation of the ancient city of Mohenjo Daro.

The Priest-King was then, and remains still, something of a mystery. Scholars know frustratingly little about the inner life of Indus Valley culture, partly because nobody has managed to decipher the script yet. There has long been a tendency to project sacred meanings onto the images that survive from this lost civilization, such as a famous Indus Valley “seal” that seems to depict a man (the god Shiva?) doing yoga:

Such projections, however,  probably tell us more about modern people than they do about the city-dwellers of the ancient Indus valley. Soon after he was discovered, somebody gave the “Priest-King” his enigmatic moniker. Today, even as internet pontificators speak confidently about the bust’s sacred status, scholars take a different view. A recent textbook by leading archaeologists cautiously proposes that the best evidence suggests that the statue is an important clan or community leader—that is, neither priest nor king. [2]

It was only in the twentieth century that this portrait of a prominent citizen got turned into a priest-king. He is more “religious” today than when he was made. Rather than saying that it is incorrect to describe this statue as a religious image, I’d say we have to accept this description as right—for the twentieth century. For a hundred years now, the Priest-King has been a place where modern people think about olden religion, pondering the eruption of ancient gods into the mundane present.

In contemporary Pakistan, Indus Valley relics sometimes assume a sort of semi-sacred significance as symbols of the nation, perhaps especially in Sindh (the state that contains Mohenjo Daro). Who wouldn’t want to understand themselves as part of the world’s oldest urban civilization? It is common enough for national symbols to be sacralized in this way, as has happened with the American flag or various countries’ tombs for the unknown soldier.

Nor is the Priest-King only pre-Islamic symbol to become important to the political self-conception of an Islam-affiliated state. Heritage symbols get charged with religious energy. This is routine.

But that raises a thorny question, expressed succinctly on one internet comment board: “To be fair though, even if the gesture is offensive—who’s it offensive to? Seems a bit excessive to prosecute people for being rude.” [2] If section 295A is about outrages on religious feelings, whose religious feelings, exactly, are our self-takers actually affecting? The ancient Indus Valley people? Or modern Pakistanis? Are they offending the Priest-King himself?

Faced with such questions, a person might become philosophical. One comment-board opinionator offers the following sage advice: “The only value status have is the one you give it. Whether you give it aesthetic value, religious value, or historical value these have as much meaning and worth as the material mind gives it. We fight over them and even die over them but these are just figments of one’s desire, discard them for a better future.” [3] There is truth to this claim, of course. Yet, as scholars have been protesting for years, images aren’t just what people make them. They seem to exert a power of their own, foisting their desires on us—or, at least, making us realize how little we’re in control of our physical things, a material world that shapes us just as thoroughly as we shape it.

If the Priest-King were the hero of this story, what would he want? Maybe just to remind us that we cannot and should not discard the past. The present is what it is because it contains multiple historical layers, which interact in unexpected ways. Selfie meets British not-blasphemy law, meets Islamic curse, meets ancient not-priest. The sacred inhabits our present in the strangest of ways.

J. Barton Scott is associate professor at the University of Toronto and the author of Slandering the Sacred: Blasphemy Law and Religious Affect in Colonial India (forthcoming with University of Chicago Press)

Thank you to Adnan Naseemullah for pushing me to write about this topic, to Nabeel Jafri for on-the-ground insights from Karachi, and to Kyle Smith for his lemur identification skills.