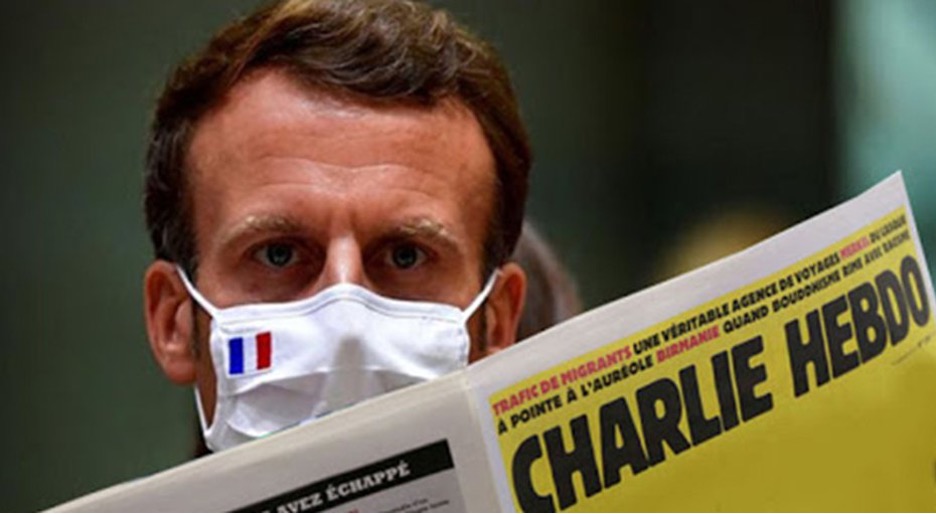 A year and a half ago, while I was reading the news, I came across French prime minister Emmanuel Macron’s public comment on the ongoing Charlie Hebdo affair.

France, he said, recognized a fundamental “freedom to blaspheme” that was linked to an even more fundamental “freedom of conscience.” Macron thus clearly aligned himself with the publishers and staff of the controversial Paris magazine, twelve of whom had been killed in 2015 by gunmen who understood themselves as defending the honor of the Prophet Muhammad against caricatures recently published in Charlie Hebdo’s pages.

Like a lot of people, I was bothered by Macron’s remarks. They got under my skin, crawling into my own fundamental indecision about questions of blasphemy. I condemn the violence of the gunmen. Parts of me also mistrust efforts to censor blasphemous speech. At the same time, Macron just seemed so willfully oblivious to what was actually going on. This was not some abstract question about free speech and religion. It was a question about a very particular set of social and political circumstances, having everything to do with the history of French colonialism in Algeria and other Muslim-majority countries, and the racialized, economically disenfranchised descendants of those colonies who now live in France—assured that they are fully French, and yet somehow always getting excluded from the nation. Surely, it was absurd to talk about religion as though religion could be extracted from politics, hovering innocently or ascetically above the muck of the world.

I am a scholar of religion. By trade, I get persnickety when people talk about religion in clunky or counter productive ways. That fall, I was also in the middle of working on a book about blasphemy and secular law in British colonial India. Macron’s remarks felt eerily similar to many of the things I’d been reading.

One of the books I’d found most helpful as I started my research was Leonard Levy’s Blasphemy: Verbal Offense Against the Sacred, From Moses to Salman Rushdie. It’s a treasure trove of information, and I am thoroughly indebted to it.I also find it extremely frustrating

If you’re the sort of person who shouts at books, you’ll get why I spent a lot of time shouting at this one. Levy wrote his book in the wake of the Rushdie affair, asindicated by his title: “from Moses to Rushdie.” It’s a comically large historical sweep—and yet somehow not large enough. If the aim is to account for the object “Rushdie,” then why rehearse a hoary genealogy of the West from the Bible to the Enlightenment to U.S. free-speech liberalism? The whole point of “Rushdie,” as long-1980s literary symbol, had been to show how mixed up the West was with the rest. How weird to put him in the title of a book that does just the opposite. Levy seems not to have taken Rushdie’s own advice. The problem with the English, says one of the characters in The Satanic Verses, is that their history happened overseas so they don’t understand it. Levy, the Toronto-born Pulitzer-winning historian, wasn’t English. But the maxim holds. If we’re trying to make sense of the Rushdie affair and similar events, his West-obsessed history isn’t just beside the point. It’s actively getting in theway. Instead, we should be doing the kind of histories scholars have variously called transnational, transcolonial, or transreligious. We should be asking how Rushdie’s beloved English literary canon had been caught up with the history of British colonialism from the get-go, or how Deobandi, Barelvis, and other modern Muslim thinkers debated the Prophet in the context of British Empire.

When I saw Macron’s remarks on Charlie Hebdo, I thought: here we go again. Another story about blasphemy that can’t think its way past the “the West” (An odd locution and, in my view, mostly an obfuscatory one: Latin Christendom turned itself into the “secular West” by way of its empires, its power-grab across the rest of the globe. To act like there’s some unbroken cultural arc from Socrates to the present is to forget too much of this history, not least the Islamicate life of Greek thinkers. It seems clearer to me to just talk about the North Atlantic region).

Anyway, I decided to do what scholars do best: I applied for a grant. I needed support in telling a new kind of story about blasphemy, emphatically and expansively global. (Thank you, Social Sciences and Humanities Research Council of Canada). Welcome to the result: The Global Blasphemer. Our aim at the site is to create a new kind of blasphemy space—one that, in its small way, might make Eurocentric accountsof blasphemy’s history harder to tell. This is a collaborative project, and anexperimental one. We’re crisscrossing geographic regions and historical periods, cutting into multiple fields of scholarly expertise. So we’re inviting scholars from all over the world to join us. They’ll write short, public-facing essays about a blasphemy or blasphemy-adjacent themes. The aim is to bridge the scholarly world and the many worlds beyond it.

At this point,you might be asking: What actually is blasphemy, anyway?

Etymologically, blasphemy is euphemism’s cruder cousin. The -pheme part is about speech. Blasphemy can thus be described as a word crime. William Blackstone, for instance (that patriarch of common law) defined it as “contumelious reproaches” of God. In Blackstone’s early modern England, it was both a political offense and a theological one, a crime against both Christianity and the Anglican Crown. Indeed, blasphemy is arguably afundamentally Christian category. Other religious traditions also regulate what could be called blasphemous speech, but the translation issues here get pretty thorny. Minor differences matter. To say that Islam forbids “blasphemy” rather than, say, takhdib is to risk seeing Islam through Christian lenses and thus miss out on a whole lot of cultural subtleties. (Such translation problems have been central to the modern politics of secularism).

In other words, once you start poking at blasphemy, you find the concept unravelling. Is blasphemy different from iconoclasm, a crime against images? What about sacrilege, a crime against objects? What happens if you hold a heretical opinion, but never express it? Is this blasphemy? There are, after all, no words involved.

Here at The Global Blasphemer, we’re not worrying too much about definitions. We’re hosting a conversation under the sign of blasphemy—a wooden board blowing in the wind outside a raucous tavern, where assorted guests have gathered. Heresy, heterodoxy, iconoclasm, parody, profanity, oaths, curses, obscenity, hate speech, trolling, slander, libel, critique, spoof, satire, sacrilege, defilement, ritual pollution, misprinted scriptures, and more.

Although our conversation ranges deep into the past, our eyes are fixed firmly on the present. When does blasphemy (a libel on religion) become hate speech or group defamation, abridging human dignity or making whole classes of person feel unsafe in public spaces? How does blasphemy, that venerable phenomenon, adapt to the digital landscapes of the twenty-first century? Our smartphones speed up communication. They also harbor monsters: trolls and more. To look through the black mirror is to see “hate speech” coopted by “hatespin,” which weaponizes feelings of woundedness till injury itself becomes a form of aggression. It is also to wonder whether laws that protect free speech, like the First Amendment of the U.S. Constitution, are now obsolete. In a world where there are reportedly more than 500 million tweets per day, is “more speech” really the best response to hate speech and disinformation, or has the sheer excess of all speech fundamentally changed our economy of truth?

What kinds of stories from the past can best help us see this present? The standard books on blasphemy tend to center on tales like that of James Nayler, the early Quaker. In 1656, Nayler rode into Bristol on adonkey in imitation of Jesus’s entry into Jerusalem, as commemorated on Palm Sunday. Bristol was not amused. Neither was Parliament. They convicted him of blasphemy. Sparing Nayler execution, authorities instead branded “B” for blasphemer on his forehead, bored a hole in his tongue with a red-hot iron, and put him the pillory.

It’s quite a story, and I’m all for remembering James Nayler. Still, there are other people to remember too. One could just as easily trot out the tale of Mansur al-Hallaj, the Persian mystic who, in a bout of religious ecstasy, infamously declared “I am the Truth.” “The Truth,” notably, was one of the 99 names of God. Was Al-Hallaj claiming divine status? Or had he experienced total annihilation of self in the divine, as mystics long to do? Authorities were neither amused, nor interested in such niceties. There was debate about what should be done, but after years in prison, Al-Hallaj was ultimately executed in 922. His memory, however, lives on.

Blasphemy, one could say, is less a concept than a tangled mess of histories. At The Global Blasphemer, we want to highlight that mess. You can see this in the essays that are kicking off the site. We meet Langston Hughes blaspheming against white Christianity by depicting Jesus as a lynched Black man. We travel to Nigeria, where a web-savvy “mixed multitude” criticizes evangelical pastors. In Pakistan, we dig up an ancient priest-king to see him insulted in a social media selfie. Finally, in India, we ask how the centuries-old practice of “body branding” has been contested and defended. In this global tableau, blasphemy is about the body. It’s about media. Above all, it’s about politics. There is no discussing religion without also discussing its political conjunctures and historical locations—how histories of race, class, gender, and so forth have shaped religion’s contested present. Sorry, Macron. “Conscience” doesn’t float free of history. Neither do French-republican values. Like the rest of us, they’re stuck on the ground.

There’s much more to come from The Global Blasphemer. Keep reading and you’ll encounter cursing Portuguese schoolgirls, Mexican erotica, Persian twitter, Tamil heretics, Hindi films, and more. Please keep with us! You can also follow us on Twitter: @GlobalBlasphemr.